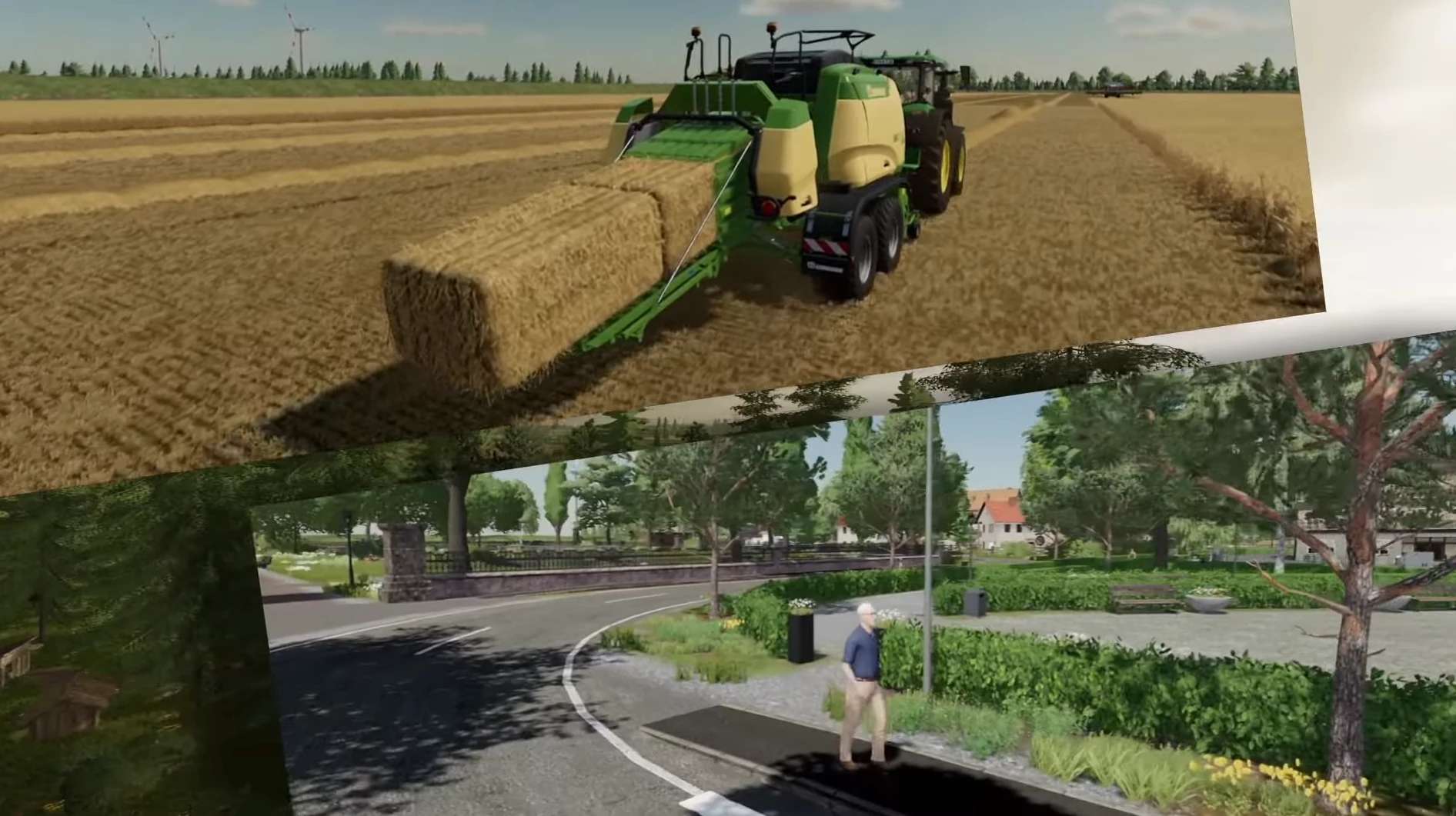 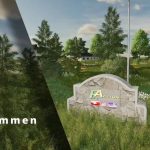 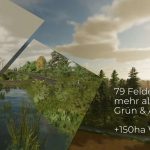 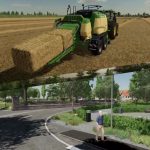 March version 1.2
Bug fix + improvements
– AI road network now also in the north and south-east
– Improved AI road network in various places (rest is game problem with collision of helpers and stationary cars)
– New values ​​for seed consumption and yield values ​​for almost all fruits (thanks to Freelancer Trent)
– Wind turbines are now turning clockwise (thanks to Andy101285)
– Various superfluous textures deleted from the map (map about 260 MB smaller)
– Various technical optimizations
– Slightly increased spawn places at the shop for the vehicles
– Changed the depot collision and raised the building a bit so that you can dump trailers better
– Moved a lamp on the road by the port further away from the road
– Improved the transition from the stadium grandstand to the hut
– Added missing water in the ditch at field 38
– Added missing water at field 78
– Added missing water at house 48
– Added missing water at the port
– Dry lake next to the sawmill sales point refilled with water
– Fixed water edge at field 27
– Floating tree behind depot moved to ground level
– Pig feed and compound feed is now displayed in the price list
– Selling prices of feed and compound feed increased
– Selling prices of sand, dirt and gravel reduced
– Moved 2 empty pallets from space for diesel production
– Adjusted the height of the lamps in the carport 45
– Fixed various floating objects above the riding arena next to house 34
– Fixed covered tables at the hardware store
– Shelf/pallets In the hall next to house 39 it is no longer written in the wall
– Car moved at house #39
– Bus stop at field 45 moved back a little
– Fixed floating tree between shop and farmstead
– Collision added at the liquid sales point at the train station
– Field definition at field 46 on the power pole slightly adjusted
– A piece of remaining road under field 21 removed
– Brand flags at the shop are back
– Fixed cars standing in each other next to field 50 (old horse farm).
– Moved tree from Sawmill sell point
– BGA volume significantly increased again so that grass silage missions are not completed so quickly
– Turned the lamp in the curve at the former sugar factory
– Double hide in the forest at field 68 deleted
– Field 35 on the dike leveled again a bit
– Collision with the lamps at the bridge to the island on the top right deleted
– Fixed invisible collision at position 1612 1543
– Manhole cover a little embellished at the shop
– Tree in the garage at no. 70 postponed
– Deleted fence below ground next to train station
– The heaps of 83 have moved and we welcome newcomers to 26 Christian to 61 Myndworm and 75 BigBauerAndy
– Scattered sunflower next to field 46 deleted
– Deleted a few deco bushes on field 57
– Removed dead sunflower at the lake below
– Deleted a few wild poplars

Typical North German landscape in North Friesland. We have dykes here, ditches around the fields, and the fields are mostly square.
The land was reclaimed from the North Sea by dikes over the past few centuries
courtyards
There are no ready-made courtyards, everyone can creatively design their own courtyard according to their personal preferences.
There are a few large spaces available for this.
A few halls and a workshop are attached to the map

fields then forest
On the NF March there are 79 fields with , from 0.8 ha to 95 ha, everything is there, average field
about 12.8 ha and the total area of ​​all fields is a little over 1000ha of which about 140ha are grassland
forest area
There are more than 150 hectares of forest with countless trees, most of which are also suitable for the wood harvester.
fruit
In addition to the standard fruits, rye, spelt, triticale and millet are now installed on the map,
there are other types of filling on the map: earth, sand and gravel
earth in the ditch
In the ditches you can find earth in many places on the map, which you can dredge and sell with an excavator,
then there is the sand, gravel, earth area where there is a lot of material to excavate and load
points of sale
If you harvest a lot, you also have to sell a lot.
There are a total of 16 different sales outlets at the NF March 4-fold, including Raiffeisen,
Port, train station but without a train, the depot, grain trade and grain AG
At the train station and at the Raiffeisen, you also have the option of buying seeds, fertiliser,
Lime, mineral feed, herbicides and liquid fertilizers
For pallet goods there are the sales possibilities Lidl, Aldi, Edeka, the stadium, the hardware store
and the spinning ball can be sold at the garden center and straw at the thermal power station,
there is also a sales station for wood the sawmill, milk goes to the dairy (no production)
Vehicles are bought from vehicle dealers and animals from local pet shops
If you leave your vehicle on the field without diesel, electricity or methane, there are 3 filling stations
2 of which are also equipped with charging stations
The card also has 2 large biogas plants which can be bought and operated
Extensive road network
In order to be able to reach all sales points easily, there is a comprehensive road network where mostly AI vehicles are on the road
There is a ready-made Autodrive network from Holger for download where all fields and all sales stations have already been driven in.
collectibles
On the NF Marsch Mod Map there are 3 different collectibles to search for.
This includes 10 pairs of Shelly shoes, 30 FA gold coins and 78 NF march pallets
For all collector’s items, there are shelves at the vehicle dealer that fill up when the items are found.
There is also a bonus when you find all objects in a category
If someone cannot find all the objects themselves, there are suitable help videos on my YouTube channel
in which I show all the hiding places of the shoes, coins and pallets.
support area
The shop area also serves as a big thank you to the numerous supporters of the NF Marsch.
We have listed the active YouTube channel members and the Twitch Subs they have made themselves
In addition, there are on the map 78 lovingly and detailed designed plots on which the
Farmer, Squire, and Twitch Subs level 3 channel members can move in.
It got crowded on the march and we can’t say thank you enough for your great support.
And once you have moved in, you can have your property individually designed with various decorative objects
empty spaces
There are at least 15 free areas on the map that will certainly be supplied with productions by me over the next few months
mod packs
In addition to the map download, there are 2 other downloads, namely the Fed Mods Pack and a Fed Production Pack
which I will present in another video, the two mods are first a summary of all my mods for the LS22
windmills
It is windy on the North Frisian Marsh and a long-term investment in wind turbines can be worthwhile.
The wind turbines installed on the map are practically only decoration and can be used after you have bought the land
has to be demolished and replaced by the NF Marsh Windmill
fruit symbols
All fruit symbols have been revised and no longer look so comic-heavy from missions
Many XXL missions thanks to the map size and the number of fields
ground textures
With a total of 18 different ground textures, everyone can design their yard and surroundings to suit them
Conclusion
Overall one can say that the NF March has changed compared to the last LS parts
further developed and has been extensively revised and beautified.