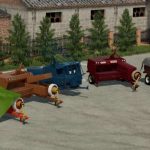 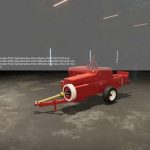 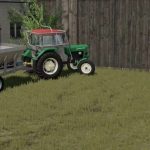 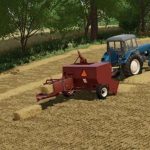 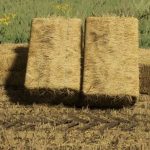 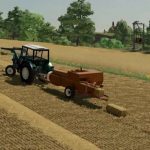 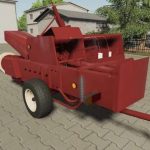 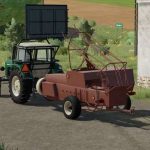 The press has a nice animation:
– Unfolding on the X key.
– Reel animation.
– Animation of a Hammer Breaking a Bale.
– Landing Landing Animations.
-Animation of the Spire.
-Standard FS22 Animation.
– Animation of Opening the Rope Flap, Camera Flap, Counterweight Flap, Removing the Wom Side Flap on the Mouse Buttons.
– Removable / Assembled Sipma tarpaulin on the mouse button.
– And many interesting elements.

Update Sipma Z224 – Sipma Z224 / 1 – V 1.0.0.1:
– Wheel configuration.
– Feeder with a nice unfolding animation in Beta Version (Beams sometimes get stuck)
– Configuring the color change of Tarpaulins (tarpaulin On the mouse button).
– Under the Rushing Spire, and a new Tail Star animation.
– Fixed Press Weight. (The press does not jump after entering the Store)
– Corrected Texture of the White Lamps.
-Improved Press Sounds.
-The press has a New Store and an Icon.
– Improved Rear Decal.
– Fixed roller.
– And New Colors.

– Added Simple_IC (Rope Flap Opening Animation, Apparatus Flap, Counterweight Flap, Wom Side Flap Removal, Tarpaulin Application)
– There is no disassembly of the sipma and no lowering of the pick-up into simple ic BECAUSE IT IS SLUDDING WITH Unfolding from the tractor.
– Pickup Frame Animations added.
– Animation of the Binding Apparatus has been added.
– Footer Animation improved.
– Press collision fixed.
– Wheel Hubs have been improved.

I emphasize: The press has no errors in the Log (Visible in the first Picture).

Prohibitions:
-No editing.
– Prohibition of changing the link.
– Ban on adding to modpacks.
– It is forbidden to impersonate the authors.
– How do you go to other forums, give the original link and the name of the author.

Please appreciate my hard work.
After obeying the Bans, there will be more polished mods.
If you see any mistake, write me and I will try to correct it .
No Likes Do not download and do not write stupid and wrong comments!
Regards AgroPhoto.